To promote and showcase the API they released in February, the folks at Instagram built and released the source for the demo app that runs http://demo.instagram.com. The app subscribes to the Instagram realtime API to be notified of new photos posted in specific geographic locations. It updates the display of the photos as they come in. 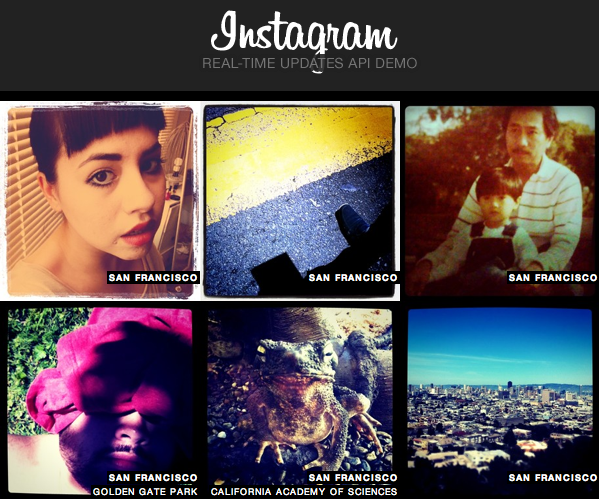 It’s a fairly simple app that’s a fun playground for a bunch of new technologies including Node.js, Redis and HTML5 Web Sockets. You can play with Node and Express, the Sinatra-like web frameworks for Node. You can play with the basic Redis commands using both the data storage and publish/subscribe models. And with Node and the socket.io library, you have a great platform for playing with pushing data to the browser with Web Sockets.

Unfortunately, when I sat down to install and run the app the other day, I ran in to a number of issues due to new versions of many of the dependent libraries being incompatible with the implementation available on GitHub.

So I forked the project and fixed it so you can play with it too. The steps below will help you get the demo running on your local development machine. Once you’re there, the fun really starts. How would you add the ability to follow a user-entered tag or send me an SMS when someone posts a photo near my house?

Check it out my fork of the project from https://github.com/asalant/Realtime-Demo.

Depending on your platform, you have a number of options for installing Node.js and Redis. I used Homebrew on my Mac to install the latest versions. The instructions in the project README are fine, but you should use the current release version for each.

Install NPM (the Node Package Manager) and the node dependencies as described in the original README.

In order to run the application locally, you need a way for the Instagram API to publish updates to the app. It does this through webhook callbacks so your app needs to be available on the public internet. localtunnel is a good solution for this. Follow the installation instructions on the localtunnel GitHub page. If you’re a Ruby developer using RVM and Bundler, my fork of the realtime app includes an .rvmrc and Gemfile that pull in the localtunnel dependency. Just run ‘bundle’ to install it and continue with the configuration instructions from the localtunnel README.

First register a new API client at http://instagram.com/developer/manage/ to get a client id and secret. For this app, the values for website and callback URL are not important. I just used http://localhost:3000.

Instead of editing settings.js to configure the client id and secret as suggested in the original project README, set environment variables which settings.js is already written to pick up. This is also useful for some of the utility commands you can execute against the API using curl as I describe below. You can either set them in each terminal session or globally in your shell environment (.profile, .bashrc, .zshrc).

I added a bunch of logging statements at key points in the code when doing my original troubleshooting. If you want to hide these additional messages, in settings.js, set:

Open a terminal and start Redis. There’s nothing special in this config except that it runs Redis on a non-default port.

Open another terminal and start the app in Node:

Open another terminal and create a localtunnel connection to forward a internet-accessible host to your local machine.

A simple test to make sure the localtunnel connection is working is to hit a non-existant URL on your node app in your web browser. You’ll get a 404 from the app.

You should see “Cannot GET /foo” in your browser.

I find that localtunnel connections will sometimes die and I have to kill it locally and start it again. If you hit /foo again and it hangs, the connection is gone. When you kill and recreate the connection, the URL changes for the callback webhook parameter so it’s handy to set this host as another environment variable.

Open another terminal and set the tunnel host in your environment:

Then add a subscription for San Francisco with a 5k radius.

If you have debug=true in settings.js, you should see the challenge callback in your Node console.

To see a list of recent media for the geography you subscribed to, put the object_id from the subscription in this URL. Note that you won’t see all these in your local app unless they’ve been added since you started receiving updates.

To clear all your subscriptions:

Localtunnel connections appear to die after a while. When they do, close the connection in your terminal, create a new one, delete your subscriptions, and add new ones with the new localtunnel URL.

Open the app in your browser to see the updates received since you started the app. You can use either the localtunnel URL or just http://localhost:3000/.

If the page loads without any images, you may not have received any updates yet. I did find that even for San Francisco the updates trickle in slowly. I like running the app with debugging on so I can tell when updates come in. The images are stored in Redis across app restarts so you can make code changes, restart, reload and see the updates you have received so far. Redis doesn’t persist across its own restarts, so if you restart Redis, you’ll start collecting updates anew. (You can enable persistence by turning on snapshotting in conf/redis.conf.)

Well that was fun. Hopefully you got it up and running a lot more easily than I originally did.

So what do you want to do next? You could deploy it to the cloud at Joyent. You could hack the UI to display updates differently. You could accept user input to create new subscriptions for tags or locations. Or you could just hack around in the code to see how this stuff really works.

I hope this helps you out and if you come up with improvements or cool hacks of your own, definitely let me know.