Some projects go so well you want to bottle them. Others, not so much. A few months ago, I started surveying our projects from the last three years. I was looking for patterns of success and … less success. I had heard people say that there wasn’t much of a correlation between projects that were successful for Carbon Five and products that were successful in the marketplace. That felt simultaneously plausible (lots of products fail, but that doesn’t mean it was a horrible project) and unlikely (it doesn’t make us happy to work on things that don’t succeed). I asked C5ers to grade projects based on how well the project went. Then I recorded whether the product had been a success (as defined by the client). It turned out that there was actually a pretty strong correlation between projects we graded higher (A or B) and products that had succeeded. And projects where the C5 team was dissatisfied often resulted in unsuccessful products. 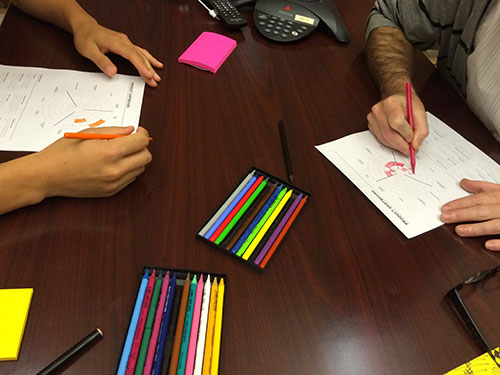 Once I saw this, I wondered: how might we increase the likelihood of success? Is there some way we could predict successful outcomes and try to make all our projects look more like the great ones? We’d have more fun and our clients would enjoy more success, in theory. But was it possible? 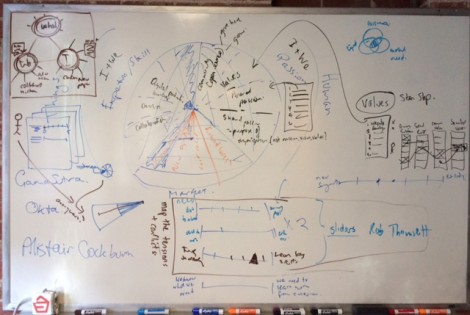 The dartboard is born! Early sketches, with thanks to Uncle Nigel

And the answer is … maybe! There’s lots of research out there about what makes projects and products more likely to succeed. I used some of this work to create the Product Dartboard, a tool that assesses a team or individual against attributes associated with project success.

So what actually is it? TL;DR

The Dartboard is based on a spider chart or circumplex graph (like this one from the Guardian). It has 12 dimensions, each of which has been correlated with project/product success by independent research conducted by real researchers (see references below).

Structurally, the dartboard roughly follows the ‘I-We-It’ framework as described by Fred Kofman. You don’t need to be familiar with that framework, or even think it’s useful, to use the dartboard. The basic idea is that product, team and personal aspects of an organization are all equally important to success, which is why they get equal space on the dartboard.

Each dimension on the dartboard is expressed as a statement. When completing the dartboard, the individual assesses the extent to which they agree with that statement. There are five “positions” for each dimension, so if you want you can arrive at a quantitative expression of the results.

Clear roles: Roles and responsibilities match skills and abilities of the team. Team members understand what is expected of them.

Understand process: The team has a process and all members have a shared understanding of that process and a say in the evolution of the process.

Experienced in software: The team has experience working on software projects similar to this one.

Experts in our field: The team includes experts in the subject matter of the product.

Clear, shared vision: There is a vision for this product and it has been clearly communicated. Team members have a shared understanding of what they’re trying to achieve.

Talent is valued: Team members feel that the work they do is respected and their contributions to the work are valuable.

Challenge: Team members feel challenged by their work and think the work is important.

Debate and decide together: People on this team give their opinions and the team debates different options and makes decisions together.

Definition of MVP: Our team is committed to building the smallest whole and releasing it to real users.

Understanding of UVP: The team can articulate the unique value proposition for this product, ie, the thing that will make users choose this over other options.

Metrics: We know how to focus on one success metric at a time.

Product/market fit: We know that we are in a good market with a product that can satisfy that market.

How to complete it

This is designed as a self-reporting tool. It reflects where the team feels they’re at. To complete it, hand each team member a copy and set out some colored pencils. Personally, I like the tactile nature of this, though others at C5 are just itching to build a digital tool!

Have team members color the segment that represents how strong they think the team is in that area. It’s a dartboard; the bullseye is in the center. Closer to the bullseye is higher agreement with the statement. Further away is less agreement. If you’re after a quantitative score, make the innermost segment a 5, and the outermost a 1, so that a higher score is better.

How to interpret it

There are a few different ways we’ve used this to change the way we manage a project to maximize the likelihood of success. You might think of more — share them in the comments!

But does it work?

I’ll be honest with you. This tool is new. We haven’t used it enough to know if it actually increases our success rate. 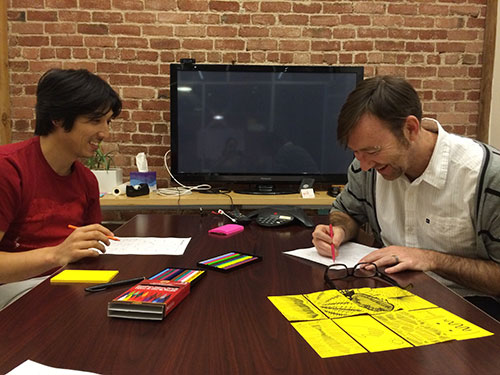 What we do know is that it has helped Carbon Five and several of our clients to identify areas we need to tackle, and to measure how we feel we’re doing. If you try it, we’d love to hear about how it went for you. I presented it as part of a talk Jeremy Morony and I gave at MagmaConf 2015 and there were plenty of interested people. Hopefully they’ll share what they learn!

Many thanks to Nigel Dalton (@nxdnz) for brainstorming initial concepts for the dartboard, and to Elias Crouch (@newdogbed) for designing a thing of beauty and usefulness.

The Five Dysfunctions of a Team, Manga Edition, Patrick M. Lencioni (quick read on behaviors that sabotage teams and how to change them)

Conscious Business, Fred Kofman (tough read, but introduces the idea of I, We, It, which was one of the structural inspirations for the dartboard)