Alex sent me an email Saturday morning with this really cute Canvas game he wrote with his daughter Ada. His timing was really great since I am on a panel at SXSW Tuesday called Is Canvas the End of Flash? He explains it all below…

I was telling Ada how video games are made one night, and she ask me if I could make a game. I said yes, we could make one together, and she bugged me all night to get started. I told her to start by designing a game on paper. She drew something that looks surprisingly like pacman (given that she’s never played the game), but she told me the dots were snowballs and that you could throw them at the monsters and use them to build walls. I started programming it as an SPA using canvas. She came up with all the rules, with some suggestions from me.

It may be that I’ve just been doing a lot of JS lately, but building a game like this in JavaScript felt really comfortable and extremely rapid. I had a basic version working with about 200 lines of code, but the details have tripled that. I went through a couple of major refactors, neither of which were troublesome in textmate.

The game is completely un-optimized, but it runs fast enough on my macbook. I know lots of ways to speed it up if I had to. It’s a little rough in a lot of areas, but it’s getting close enough to present. 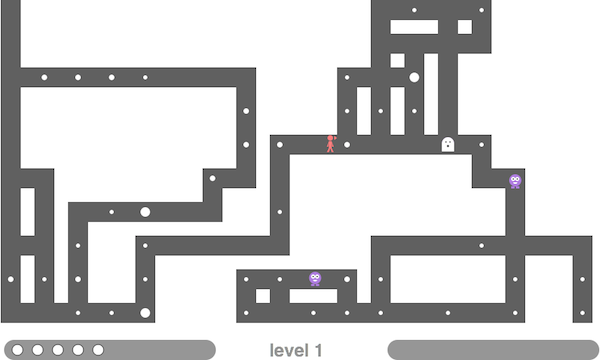 Load in Firefox or Safari. The arrow keys move your character, the spacebar launches snowballs (which you have to collect). Hit a monster 5 times to freeze it, then touch it to collect it.