With all the talk here at Carbon Five about integrating design thinking in to our projects, we realized it was time to take action. The best way to help our software development teams develop an understanding of what it means to practice design thinking was to simply do it. We decided to use the d.school’s Redesign the Gift-Giving Experience curriculum to run a one hour design thinking boot camp at Carbon Five.

This post details our experience and provides tips for you if you want to run a similar session with your team. We had some help from the d.school’s Susie Wise in preparing for this session and her advice is included here. 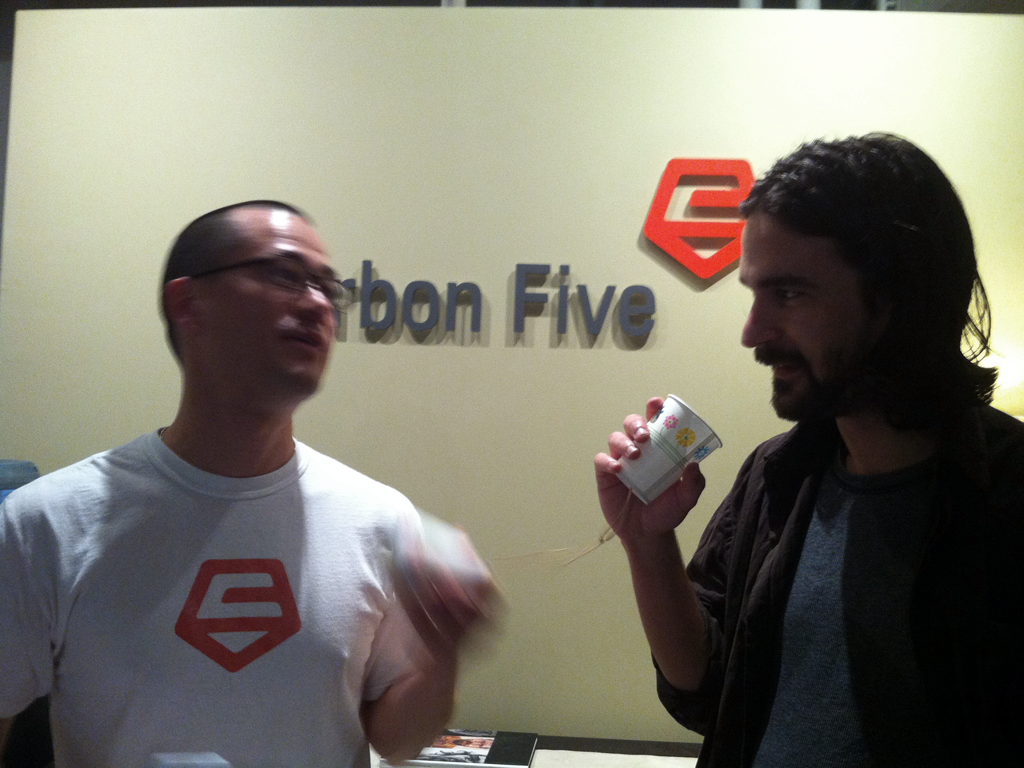 In this seminar, pairs of designers work to create a new “gift giving experience” for their partner. The result of the hour-long exercise can take any form: a physical product, a new kind of store, some software or even a game. The curriculum runs the pairs through a bunch of activities in the various design modes: empathy, define, ideate, prototype and test. The activities are done on a tightly timed schedule so the partners manage to research, design and build a prototype of their solution in just an hour.

It was really easy to set up and facilitate and led to some really clever designs and a lot of insights into design thinking here at Carbon Five. Here’s how it went:

You’ll need to gather some supplies to make sure everyone has everything they need for the hour. We spent maybe an hour shopping at a pharmacy, an art store and an office supply store. The office supply store turned out to have the best stuff. We ended up with: 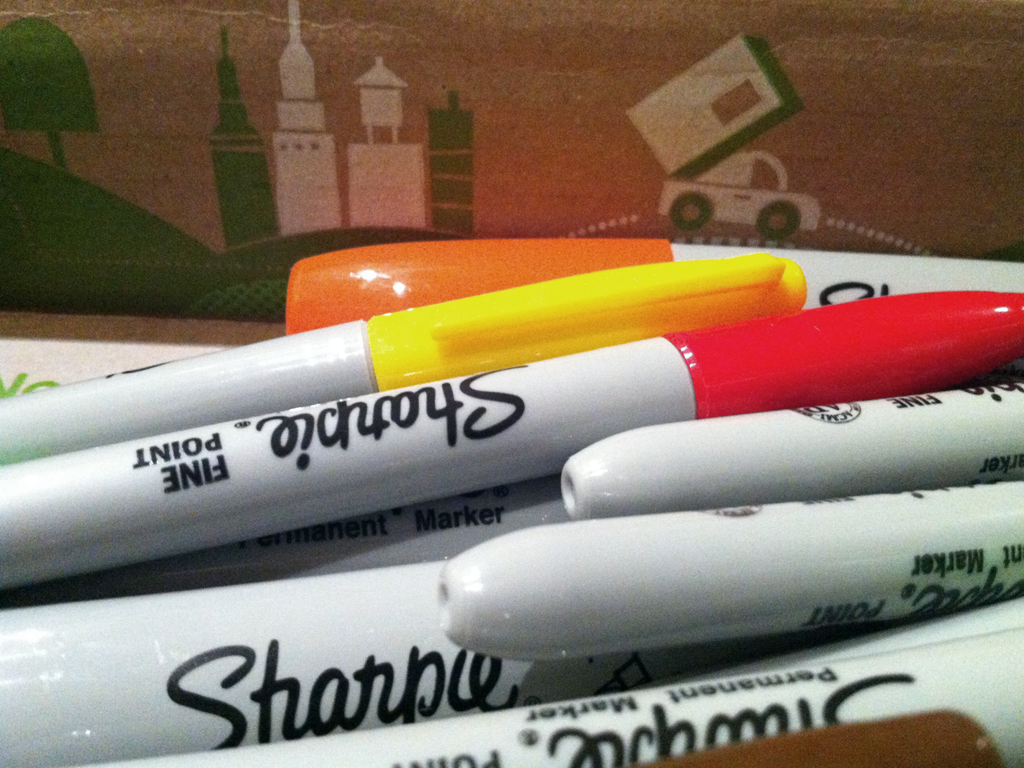 Really anything goes; just walk through a market and use your imagination. We had one designer use paper cups and string to simulate a telephone conversation and another use paper bags and slips of paper to simulate a random item generator.

We printed out 20 tabloid-sized color copies of the bootcamp document itself along with a couple of the facilitator guides on regular letter-sized paper.

Since we didn’t have any experience running the bootcamp, the two of us who were going to facilitate the afternoon seminar with all 20 employees took an hour in the morning to practice. It turned out we probably didn’t need two facilitators in the end, but with 20 designers and no experience, it seemed like a good idea. Since we didn’t want to just practice on each other, we grabbed one of our on-site clients and one of us played moderator while the other one created the other half of the design pair. 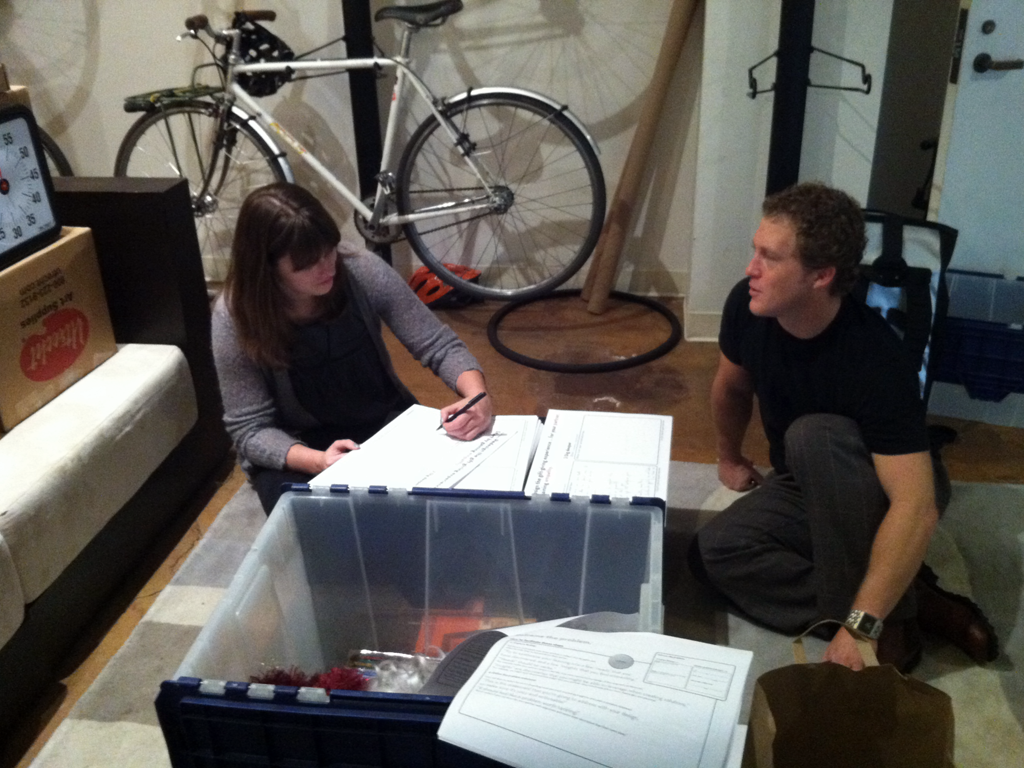 This turned out to be a nice confidence builder since the morning practice session went very smoothly. If you’re at all worried about navigating a large group through unknown waters doing a dry-run is a a great idea. Plus, it’s nice to have an experience as the designer so you’ll have a little empathy for the learners when you take the role of facilitator.

We scheduled the event right before our company holiday dinner, mostly because we knew everyone would be in the office, but this also seemed to set a nice mood for the exercise. By 3 o’clock we had tidied up some open space and spread our supplies out throughout the work area. We through on some up-beat music, gathered everyone around an began the bootcamp.

You’ll need to figure out a way to pair people up. We wound up having folks sound off a number, counting up to half the total number and then repeating the sequence for the remainders. Something a little more clever might have been fun and loosened everyone up. It’s also a good opportunity to give folks who don’t often get to work together a chance to collaborate.

We had a short physical warm up exercise planned to get everyone’s energy flowing but forgot to do it in our own excitement of getting the hour started. 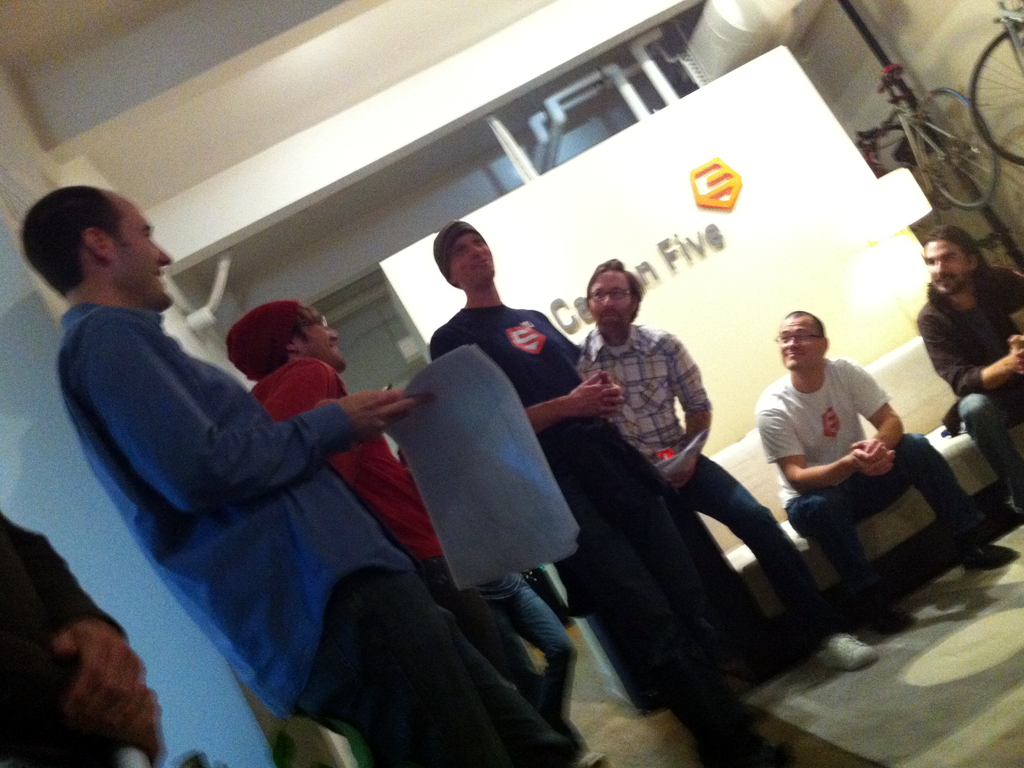 Before each activity we had the group assemble for instructions then each team went off into a different part of the space to do the exercise. This created a nice rhythm although we probably lost a little time while everyone moved around.

We used a Time Timer to keep things snapping, along with a gong to scare people into stopping what they were doing if it seemed like fun. The biggest complaint we had (see the next section) was the short amount of time for each activity, but it’s worth being disciplined about it so you can get the whole thing done in an hour.

During each exercise the two facilitators would walk around saying (or shouting) words of encouragement to stoke the creative fires. There are a handful of stoking phrases printed in the facilitators guide and you can generate a ton more by reading through the bootcamp bootleg, also by the d.school. In the end, moderation was way easier than we thought it was going to be, but there’s a still a ton to learn about how to do it right.

After the hour was up you’ll want to set aside some time to demo and debrief. We set out all of the prototypes on a big table and gathered the group. We didn’t have time to walk through everyone’s design but we had volunteers offer to demo stand-out designs that were done for them and asked folks to request walk-throughs for others that piqued their interest. 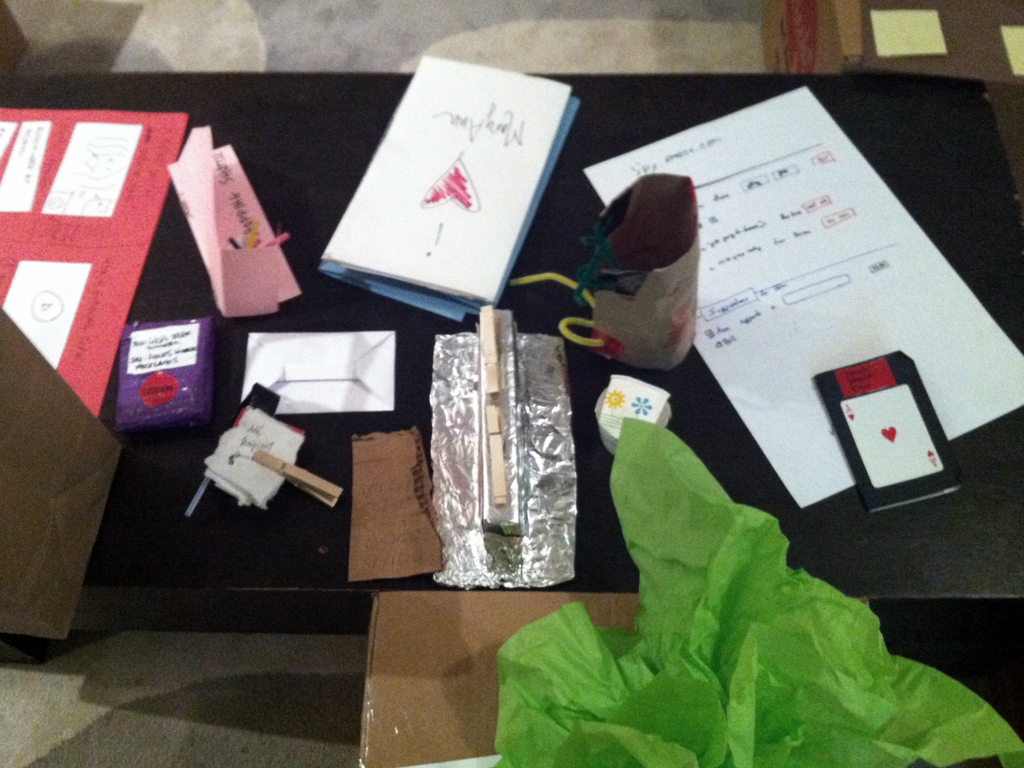 We wound up sitting around for a half hour after and talking about how design thinking could be applied at our organization. These insights were really interesting and having time for a bit of a meta discussion after what was a intense experience was a great idea.

The d.school design bootcamp was designed to give anyone access to design thinking in their organization and it does a great job. Plus it takes just an hour (along with some minimal prep) so there’s hardly a reason not to give it a shot. That said, if we were to do it again, we might have done a couple things differently. 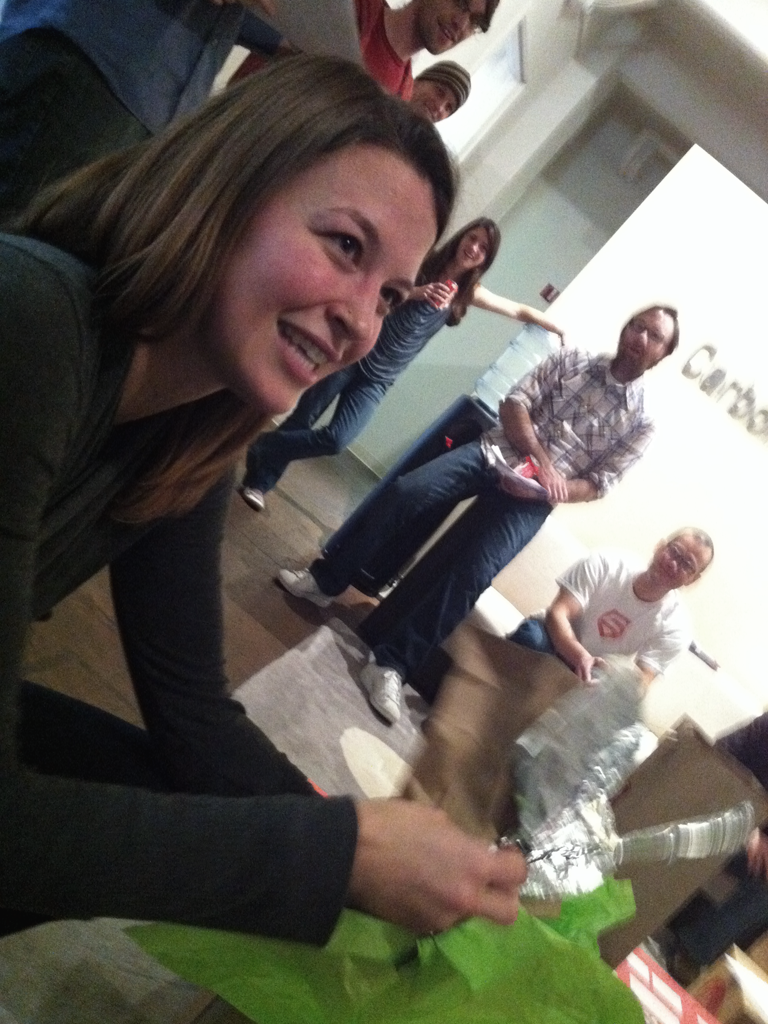 For one, it’s worth prepping folks in advance that they’re not design a special gift for their partner, but rather redesigning the gift-giving experience in its entirety. It seemed clear to us since we had read through the entire document (and practiced once) but a couple of the teams got off track for the first exercise or two until we walked around and saw where they were headed.

Also, the challenge posed by the very limited time can be really difficult. It might be worth letting people know up front that they will probably feel like they don’t have time to complete each exercise. As Agile software developers, we’re conditioned to thinking of our one week iterations as about as compressed as you can get, so a one hour iteration was a bit of a shock. Once we were in the debrief, the built-in “bias towards action” and the iterative nature of the process really clicked, but mentioning up-front that the time limits weren’t being imposed by the facilitator but rather by the curriculum might have helped.

Our biggest challenge as moderators was one person getting stuck early on in the process and feeling that they didn’t have enough information to move to the next step. We didn’t realize this until we’d moved forward a couple steps and found this person frustrated and ready to give up. Reflecting later, we realized we could have just had them go back to the step where they’d been tripped up and work forward as far as they could with the time they had. Next time, we’ll check in more closely with participants and be willing to have the team-member back up a step or two in the process while their partner keeps going. They may find that they can catch up or skip ahead once they have an idea for their prototype that they feel confident they can learn from.

So, all-in-all a great way to spend an hour. For us it probably raised as many questions as it answered, but that’s kind of the point. If you’ve done the d.school design bootcamp at your organization, please share what you’ve learned.