My problem: Grid layouts – crazy, sexy, cool. Presentation classes in my semantic markup – neither sexy nor cool, and arguably crazy.

These days I can’t help but notice a burgeoning awareness regarding seasoned typographical principles and practices and lively discussions around the best way to bring these ideas and procedures to bear in the realm of web design. One area of these discussions that dovetails with my own interests is the subject of grid layouts. Grid systems are the architectonic foundation of a well structured and holistically interrelated design. They originated during the reign of the International Typographic Style, a primarily Swiss graphic arts movement which occurred after World War II. Grid layouts were cultivated and matured in the hands of such legendary designers as Emil Ruder and Josef Müller-Brockmann, acknowledged masters of simultaneously presenting information in a functional and stylistic manner. As web designers, I feel we should constantly strive for these same goals – the presentation of information in a readily understandable way, yet also striving for an elegance in our presentation. Grids can help us accomplish this goal.

Over the past few years much headway has been made in cultivating an online consciousness of Grid Systems. Khoi Vinh and Cameron Moll have shown us the benefits of using grid systems for web layouts, and Antonio Carusone from AisleOne has recently pieced together the awesome grid oriented hub, The Grid System. Further, a number of CSS based grid frameworks have been popping up on the scene. Those that have much traction in the blogosphere–Blueprint, YUI Grids, 960 grid system–are only the tip of the iceberg.

I’ve been interested in experimenting with one of these frameworks for a while, but I have a single nagging concern with the way they are structured. All of the frameworks I have looked at use CSS class definitions which possess names that reek of presentational concerns. For example, Blueprint requires class names like “span-7 last” or “span-8”; 960 favors the equally presentational “grid_1 prefix_1” or “grid_7 alpha.” I just can’t get on board with this approach. I’m a firm adherent to notions of lean, minimal, and semantically vaible (X)HTML markup. The web development community has made great strides in separating out presentational concerns from the meaning inherent in well-crafted (X)HTML, divorcing the two orthogonal axes of style and semantics. And while I am a firm believer in the power of the grid to unify these two axes, as has been so well exhibited in the world of print, I cannot support said unification if it comes at the cost of reintroducing presentational markers into our markup – even something as ostensibly innocuous as a ‘mere’ presentational class.

So, where does that leave us? Is it possible to get the best of both worlds? Can we simultaneously develop semantic markup while leveraging those tried and true grid layout principles common enough to be packaged into a framework?

A potential solution to my problem: Compass – crazy? sexy? cool? To be determined…

Much to my pleasure, I am alone in neither my conviction nor my desire. Enter Compass, a ruby based application which provides Sass based APIs to many of the most prominent CSS frameworks, including those concerned with providing grid layouts. Compass sits on top of Sass, a domain specific language (DSL) for programmatically crafting CSS. The power of Sass derives from the fact that it is a real programming language, replete with all the benefits of such a thing: pragmatic tools such variable declarations, control structures, and method invocations, as well as more theoretical, but no less useful, concepts like abstraction, DRY-ness, encapsulation, modularity, and code re-use. I’ll admit, I’m new to Sass, having used it only superficially on a small work project. I have barely scratched the surface of its capabilities. And while some feel its application fails when applied to large scale projects, I can’t help but favor the programmatic benefits Sass brings to the table given my software engineering background.

Armed with Sass, developers can effectively write small libraries of code which will ultimately be translated into CSS. And Compass provides them with a mechanism for collecting these Sass libraries together and incorporating multiple APIs to into their own projects.

So, how does Compass help preserve semantic markup?

One of Sass’s most compelling features is known as a ‘mixin’. A mixin is a small module of Sass code, defined but once, that can be included into a Sass file and then referenced throughout. You can see where this is going. Imagine that in your application’s Sass file, you can gain access to, for example, 960’s grid layout API. You can ‘mixin’ these snippets of Sass code directly into your own semantic class definitions forgoing the need to use 960’s presentational class names anywhere in your (X)HTML. In short, Compass grants you the power to marry a tightly structured grid-layout with the beauty of lean, semantic markup. Pretty nifty, no?

So I decided to put all this to the test. I needed to learn more Sass, I wanted to play with the 960 grid system, and I wanted to vet Compass’s claim that it can help you eat a grid-layout cake iced with sugary semantic goodness. Follow along if you will…

Installing Compass and the 960 plug-in

Since I already had Ruby and RubyGems installed, I was ready to start straight away with the installation of Compass.

First, I installed the bleeding edge of Haml, which includes Sass:

I verified my Sass installation:

Good to go. Next, I installed Compass and the 960 plug-in:

Now I had my template project, which comprised:

Out of the box, the 960 plug-in produced two Sass files, grid.sass and text.sass. These two files mirrored the CSS files that come with the 960 framework, 960.css and text.css respectively. Whe I inspected the *.sass files, I noticed they already contained code to get me up and running with a basic 960 grid layout.

At this point I took some time to finagle things into a state commensurate with my overall goal – the elimination of 960’s presentational class names. First, I wasn’t interested in 960’s typography, so I ditched text.sass and text.css. Second, I also ditched grid.sass and grid.css, because those files provide access to styles designated with presentational class names, for example: ‘.container_12’, ‘.grid_4’, etc. Next, as learning exercise, I converted my variation on Eric Meyer’s CSS reset to Sass. Finally, I set up an application.sass file, being sure to include the 960 API and Compass’s clearfix module.

Ok, cool. I had some Sass files, but where were my CSS files? Simply enough, I had to run Compass to generate them.

Manually regenerating your CSS files everytime you make a change is burdensome. Compass can be run as a process that detects changes to your source files and automatically regenerates your css. I’ve found that leaving this process running in its own shell is useful so I can keep an eye on the Sass log for parsing errors.

So I ran compass as a daemon to forgo manual re-generation:

Great. Setting up a basic Compass project went off with out a hitch. I added in the remaining requisite files — an index page and the jQuery javascript library — and was ready to… Oh wait, what am I building?!

Because my whole endeavor was motivated by an intuitive yearning for transparent and easily interpretable semantic information, I decided to tip a hat to my favorite muse, Bittersweet Irony, and design a newspaper that had but one purpose – proffering the opaque and the impenetrable. Enter, The Obscurantist! As newspapers traditionally adhere to very strict grid layouts, the Obscurantist would allow me to learn the basics of the 960 framework.

In my view, some of the most useful resources provided by the 960 framework are the sketchsheets and grid templates. The sketchsheets were great for quickly thumbnailing rough ideas.

Here’s an example of a sketchsheet, marred only by my attempt at artistic expression: 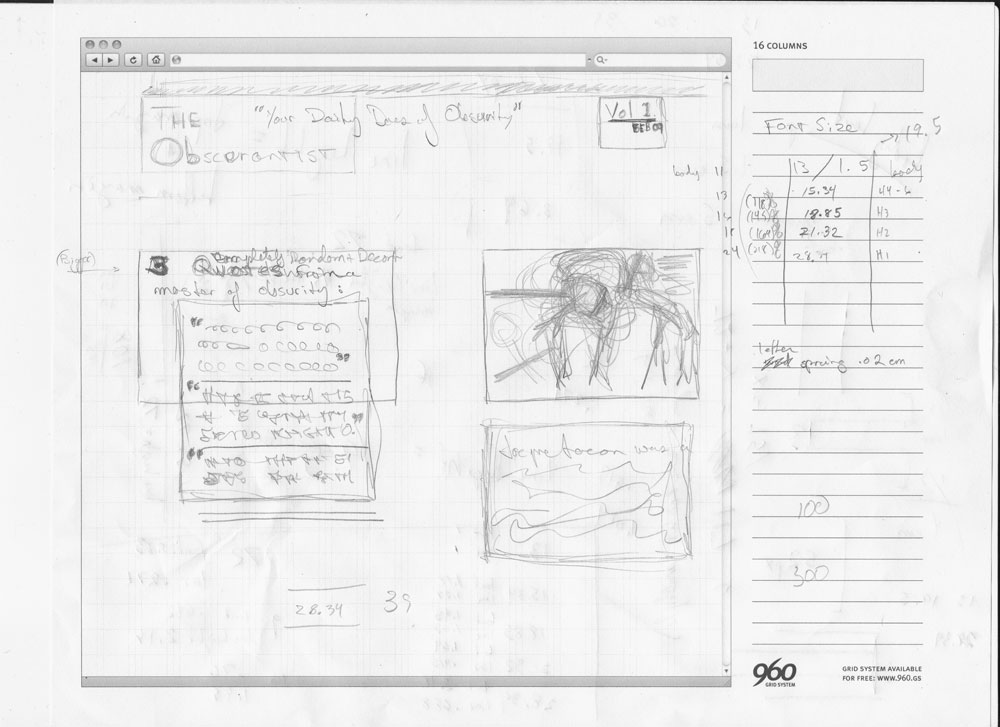 Example usage of the 960 framework

16 columns was overkill, so I decided to fire up Illustrator and utilize 960’s Illustrator 12-column grid template as a background layer to help me lay out my page design. (960 comes with a range of templates catering to the most prominent graphics programs.)

The next step was converting my design to semantic and valid XHTML. This post is already long enough, so I won’t bore you with the details. Suffice it to say, I tried my best not to let presentational concerns influence my markup. By keeping things as semantic as possible, I set the stage for seeing how well Compass would facilitate leveraging 960’s layout structure in spite of the framework’s presentational class names. Feel free to pop open firebug and check out the The Obscurantist’s markup for yourself.

The next step was to implement my 12-column grid layout in application.sass. As I had already designed The Obscurantist in Illustrator using the 960 grid template as a backdrop, coding up the grid was very straight forward. It turns out I can count to twelve, so I was in good shape. I’ve included the relevant aspects of application.sass below. Read it over, and below I’ll explain Compass’s 960 API in more detail.

Keen readers will notice that while the 960 grid system supports only 12 and 16 column layouts, +grid(m,n) is a method call which supports any number of columns. That’s right, Compass provides a completely customizable 960 pixel wide layout. The various column widths are calculated when Sass generates your CSS. (More on this below.)

So what about this ominous sounding “Alpha” and “Omega” business? As it happens, the 960 framework defines a gutter of 20px, each neighboring element contributing a 10 pixel margin to the overall gutter. Therefore, there will be a 10 pixel margin on the left and right hand sides of the overall grid container, constituted by the left side of the first element in a row and the right side of the last element in a row. (Check out The Obscurantist in Firebug for a better understanding.)

But, what happens if you are nesting grid elements? In that case you don’t want the child to re-contribute 10 pixels of outside margin, as the parent element already took care of this. What do you do? Simply demarcate the left most nested element as the ‘Alpha’ and the right most nested element as the ‘Omega’. Doing so will remove the outside margins and your grid layout will remain locked in place.

One additional note, the container element has had a clearfix applied to it, so that it will expand to
contain its floated child elements. This allowed me to attach 960’s 12-column grid image as a background to ensure my layout exactly matched my mockup.

The end result – The Obscurantist. You can toggle the 12-column grid background using the button in the upper right-hand corner.

I’m sold. Compass successfully allowed to me attain my goal: overall clean, minimal, and semantic markup and a rigid adherence to an underlying grid-system.

Finally, the example site is up on github, feel free to peruse it if you need a more comprehensive view of the working parts.

In summary, if you want to leverage CSS frameworks while maintaining the semantic purity of your markup, take a moment to check out Compass. I think you’ll find it opens up a great new space of possibility.