Command line builds for Xcode 4 projects are a good first step but I really want to get my project’s tests running on a continuous integration server again. Since “test” isn’t a valid build action to pass to xcodebuild I’ve been looking for a configuration which would allow me to run tests in a headless environment.

I expect that GTM, GHUnit, and Cedar will all have reliable support for Xcode 4 projects eventually but I would like to start with just seeing some SenTestingKit tests pass.

I have been able to run test suites from the command line but only for “logic” tests. From the iOS Development Guide:

Logic tests.
These tests check the correct functionality of your code in a clean-room environment; that is, your code is not run inside an application. Logic tests let you put together very specific test cases to exercise your code at a very granular level (a single method in class) or as part of a workflow (several methods in one or more classes). You can use logic tests to perform stress-testing of your code to ensure that it behaves correctly in extreme situations that are unlikely in a running application. These tests help you produce robust code that works correctly when used in ways that you did not anticipate. Logic tests are iOS Simulator SDK–based; however, the application is not run in iOS Simulator: The code being tested is run during the corresponding target’s build phase.

I am able to create a set of logic tests as a separate build target and scheme which will successfully run as part of an xcodebuild build. 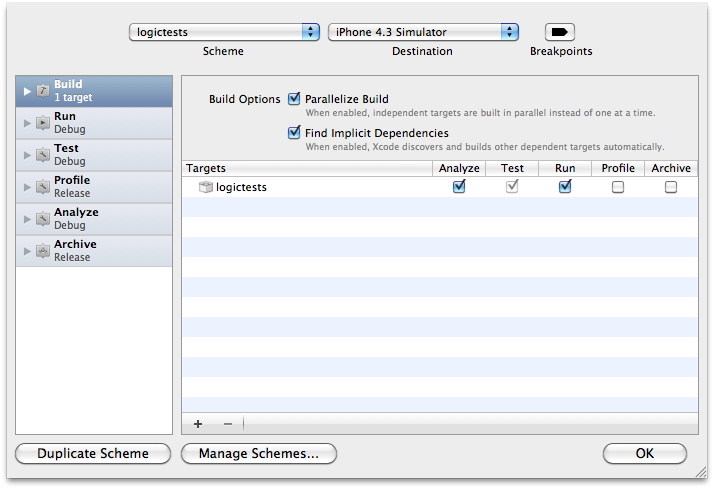 That’s not a great solution but it at least allows me to run some tests on a continuous integration server. Hopefully I can find a way to run application tests through xcodebuild as well.