With JavaScript approaching near-ubiquity as the scripting language of the web browser, it benefits you to have a basic understanding of its event-driven interaction model and how it differs from the request-response model typically found in languages like Ruby, Python, and Java. In this post, I’ll explain some core concepts of the JavaScript concurrency model, including its event loop and message queue in hopes of improving your understanding of a language you’re probably already writing but perhaps don’t fully understand.

This post is aimed at web developers who are working with (or planning to work with) JavaScript in either the client or the server. If you’re already well-versed in event loops then much of this article will be familiar to you. For those of you who aren’t, I hope to provide you with a basic understanding such that you can better reason about the code you’re reading and writing day-to-day.

In JavaScript, almost all I/O is non-blocking. This includes HTTP requests, database operations and disk reads and writes; the single thread of execution asks the runtime to perform an operation, providing a callback function and then moves on to do something else. When the operation has been completed, a message is enqueued along with the provided callback function. At some point in the future, the message is dequeued and the callback fired. While this interaction model may be familiar for developers already accustomed to working with user interfaces – where events like “mousedown,” and “click” could be triggered at any time – it’s dissimilar to the synchronous, request-response model typically found in server-side applications. Let’s compare two bits of code that make HTTP requests to www.google.com and output the response to console. First, Ruby, with Faraday: The execution path is easy to follow:

Let’s do the same in JavaScript with Node.js and the Request library: A slightly different look, and very different behavior:

The decoupling of the caller from the response allows for the JavaScript runtime to do other things while waiting for your asynchronous operation to complete and their callbacks to fire. But where in memory do these callbacks live – and in what order are they executed? What causes them to be called? JavaScript runtimes contain a message queue which stores a list of messages to be processed and their associated callback functions. These messages are queued in response to external events (such as a mouse being clicked or receiving the response to an HTTP request) given a callback function has been provided. If, for example a user were to click a button and no callback function was provided – no message would have been enqueued. In a loop, the queue is polled for the next message (each poll referred to as a “tick”) and when a message is encountered, the callback for that message is executed. 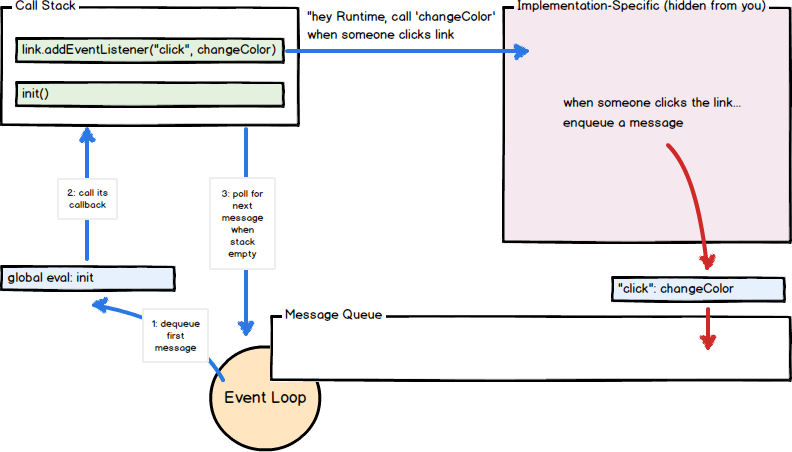 The calling of this callback function serves as the initial frame in the call stack, and due to JavaScript being single-threaded, further message polling and processing is halted pending the return of all calls on the stack. Subsequent (synchronous) function calls add new call frames to the stack (for example, function init calls function changeColor). In this example, a message (and callback, changeColor) is enqueued when the user clicks on the ‘foo’ element and an the “onclick” event fires. When the message is dequeued, its callback function changeColor is called. When changeColor returns (or an error is thrown), the event loop continues. As long as function changeColor exists, specified as the onclick callback for the ‘foo’ element, subsequent clicks on the element will cause more messages (and associated callback changeColor) to become enqueued.

If a function called in your code is asynchronous (like setTimeout), the provided callback will ultimately be executed as part of a different queued message, on some future tick of the event loop. For example: Due to the non-blocking nature of setTimeout, its callback will fire at least 0 milliseconds in the future and is not processed as part of this message. In this example, setTimeout is invoked, passing a callback function g and a timeout of 0 milliseconds. When the specified time elapses (in this case, almost instantly) a separate message will be enqueued containing g as its callback function. The resulting console activity would look like: “foo”, “baz”, “blix” and then on the next tick of the event loop: “bar”. If in the same call frame two calls are made to setTimeout – passing the same value for a second argument – their callbacks will be queued in the order of invocation.

Using Web Workers enables you to offload an expensive operation to a separate thread of execution, freeing up the main thread to do other things. The worker includes a separate message queue, event loop, and memory space independent from the original thread that instantiated it. Communication between the worker and the main thread is done via message passing, which looks very much like the traditional, evented code-examples we’ve already seen.

A Note on Closures

JavaScript’s support for closures allow you to register callbacks that, when executed, maintain access to the environment in which they were created even though the execution of the callback creates a new call stack entirely. This is particularly of interest knowing that our callbacks are called as part of a different message than the one in which they were created. Consider the following example: In this example, the changeHeaderDeferred function is executed which includes variable header. The function setTimeout is invoked, which causes a message (plus the changeHeader callback) to be added to the message queue approximately 100 milliseconds in the future. The changeHeaderDeferred function then returns false, ending the processing of the first message – but the header variable is still referenced via a closure and is not garbage collected. When the second message is processed (the changeHeader function) it maintains access to the header variable declared in the outer function’s scope. Once the second message (the changeHeader function) is processed, the header variable can be garbage collected.

JavaScript’s event-driven interaction model differs from the request-response model many programmers are accustomed to – but as you can see, it’s not rocket science. With a simple message queue and event loop, JavaScript enables a developer to build their system around a collection of asynchronously-fired callbacks, freeing the runtime to handle concurrent operations while waiting on external events to happen. However, this is but one approach to concurrency. In the second part of this article I’ll compare JavaScript’s concurrency model with those found in MRI Ruby (with threads and the GIL), EventMachine (Ruby), and Java (threads).